Natasha Kmeto announces her return, bringing her singular sound back to fans with the release of her third full-length album, “you’ve never danced alone”. The forthcoming album is her first full-length album release since 2015 and is due on September 25th, 2020.

Kmeto wrote, recorded, performed, engineered and mixed “you’ve never danced alone” in her studio in Portland, OR. It was mastered at Breakpoint Mastering in Portland, OR.

The album is composed of 11 tracks and ranges from bittersweet love songs like “nothing forever” and “she found me” to soulful dance tracks like “trust issues” and the title track “you’ve never danced alone”.

Since her last full-length release “Inevitable”, Kmeto’s sound remains emotionally driven yet more grounded and assured. The songs are inspired by major life changes including a divorce, finding new love, exploring sobriety and re-connecting with forgotten ancestry. Writes Kmeto: “This album is a snapshot of my life at a very tumultuous time… the album progresses as my life did… creating this helped me gain a deeper understanding of myself…”

Sonically, the album draws influence from minimal techno, house, IDM and dark wave. “I wanted to return to a more minimal style of composition, more reminiscent of my first album,” continues Kmeto. “I’ve always believed firmly in the power of negative space to really highlight what’s most exciting about sound and vibration.”

Each track has a unique story of its own but the album centers itself around what Kmeto has become known for: emotional, intimate and soulful music that roots itself in honest self-exploration.

02 parting words from a scorpio

04 rave to the grave 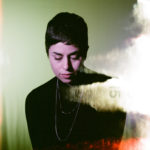