Indie electronic favorite Yppah returns after his latest full-length LP ‘Sunset In The Deep End’ (released in February 2020 on Future Archive Recordings), with an alternate edit of ‘Autumn Phase (feat. Ali Coyle)’. Mixed and re-composed by Little People, a long staple in the downtempo and experimental electronic scene, the alternate edit provides a more future electronic and IDM-inspired presentation of the original song.

Yppah’s album ‘Sunset In The Deep End’ went to #1 on the CMJ electronic radio charts in the US, with key pickups by stations such as KEXP, KCRW, ECHOES, and more. Yppah has forged a career marked by ethereality and dynamism. Brought up on equal parts My Bloody Valentine and hip-hop, he has utilized a number of instruments and techniques in forging his place in the uplifting (yet firmly grounded) world his music inhabits. Yppah embraces hardware in a big way, continually experimenting with gear while writing to find the best suited combination for his workflow.

Over the last 10 years Little People has released a string of successful releases, including his latest album, ‘Landloper’, which was released in January 2019 on Future Archive Recordings. Little People’s sound is part beats, bleeps and snippets of other people’s music. Stemming from hip-hop, it effortlessly combines warm synths, intricate melodies and string arrangements. 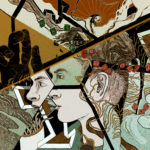